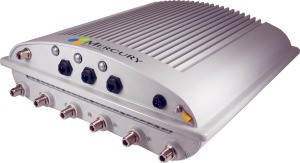 The all in price to the Operator (Wireless Service Provider) is $9,995

Mercury Networks Quantum 6600 is Ideal For: