How to Utilize LTE and the CBRS Band

There's been a buzz around Long Term Evolution (LTE) and the Citizens Broadband Radio Service (CBRS) among both mobile and fixed internet providers in recent years. New growth opportunities tied to deploying LTE and operating in the CBRS band have also spread the excitement among CLECs/ILECs, MSOs, utilities, municipalities and other industries. In this article, we'll break down the value proposition and see an example of a WISP utilizing LTE. 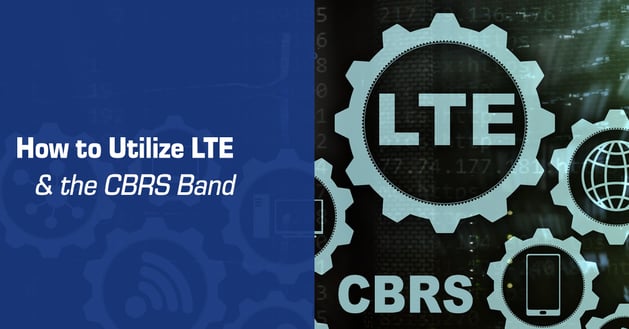 Superior NLOS performance, clean spectrum access, standards based interoperability, and scalability are main features of LTE's value proposition. Much of the fixed wireless deployment of LTE will take place in the Citizens Broadband Radio Service (CBRS) 3.65 GHz band, which adds another dimension to the unique potential for LTE to deliver a new level of service. Before elaborating on CBRS, let's consider one example of a WISP seeing success with LTE.

Example of WISP Success with LTE

One example of success comes from Dusty, Director of a wireless ISP from Texas. He  reports how his WISP has a great thing going with LTE in their network:

“We’ve started to upsell our 900 MHz customers to faster LTE service in 3.65 GHz. They were getting about 10 Mbps and it was inconsistent at times. Now with our LTE service they’re getting 50 Mbps consistently. We’ve already moved 10 customers over, and expect to be up to 30 within about a month. What’s more exciting is that we have half a dozen other similar areas of our network where we plan to roll out the same LTE upgrade.”

As referenced above, deploying LTE in the CBRS band presents another level of opportunity. The CBRS band, aka the “Innovation Band,” is technically the lightly-licensed spectrum between 3550~3700 MHz. It's regulated for commercial deployment as Part 96 Rules, and the primary use will be for LTE.

Rules for band usage help protect the integrity of the spectrum. These include the requirement for all LTE devices to be:

The Initial Commercial Deployment (ICD) began on Sept. 16th, 2019. Once completed, a time line will be formalized for spectrum access. This will be divided into three access tiers, each having interference protection from from the lower tier(s). In order of priority, the tiers are Incumbent, then Priority, then General access.

Chapter 5 of our WISP Guide 2019 covers LTE & CBRS in greater detail, and provides additional examples of WISP deployments. Download the guide today for additional info on this and other related topics.