In the United States, over 16 million people live without broadband. Access to high-speed internet has become critical to those living in rural areas, that are often neglected. Their limited internet access is often slow, expensive and with high latency.

Without access to high-speed internet, many of America’s most vulnerable population are at a distinct disadvantage. Businesses have a hard time competing in the modern marketplace, and school children have  limited access to information and resources.

Microsoft ® has come forward to bridge the broadband gap. They believe that the problem is urgent, so they've developed the "AirBand Initiative" to bring broadband to rural areas. Microsoft's ® first expectations were to serve two million customers in 16 states (dark blue below). Recently they have increased their goal to three million people across 25 states, over five years (additional states to be named). 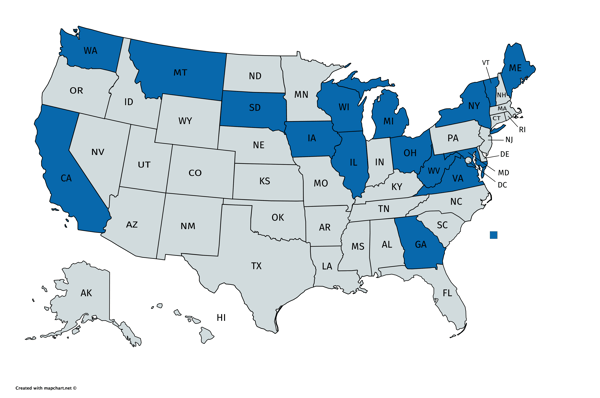 To achieve this goal, Microsoft ® will allow 39 of its patents in various technologies to be used license free. Microsoft ® will also partner with manufacturers like Redline Communications, but also with select Internet Service Providers (ISPs).

Redline Communications offers the leading ecosystem for TVWS technology. Redline and Microsoft ® have been in discussions for more than two years to align visions and layout the initial framework of the Airband partnership.

The benefits of being an Airband member and using Redline’s TVWS equipment are:

Applying for an Airband ISP Grant

Service providers that wish to participate in the Airband program are encouraged to visit the Microsoft Airband Web Portal for more information.