Q&A with Wireless Supervisor of Telco Founded in 60s

Fixed wireless is helping many industries evolve to support their customers changing needs and find an additional source of revenue. The development of cellular phones, broadband and VoIP has reduced the demand for land line phones. This has left many telecom companies searching for additional sources of revenue as they modernize. 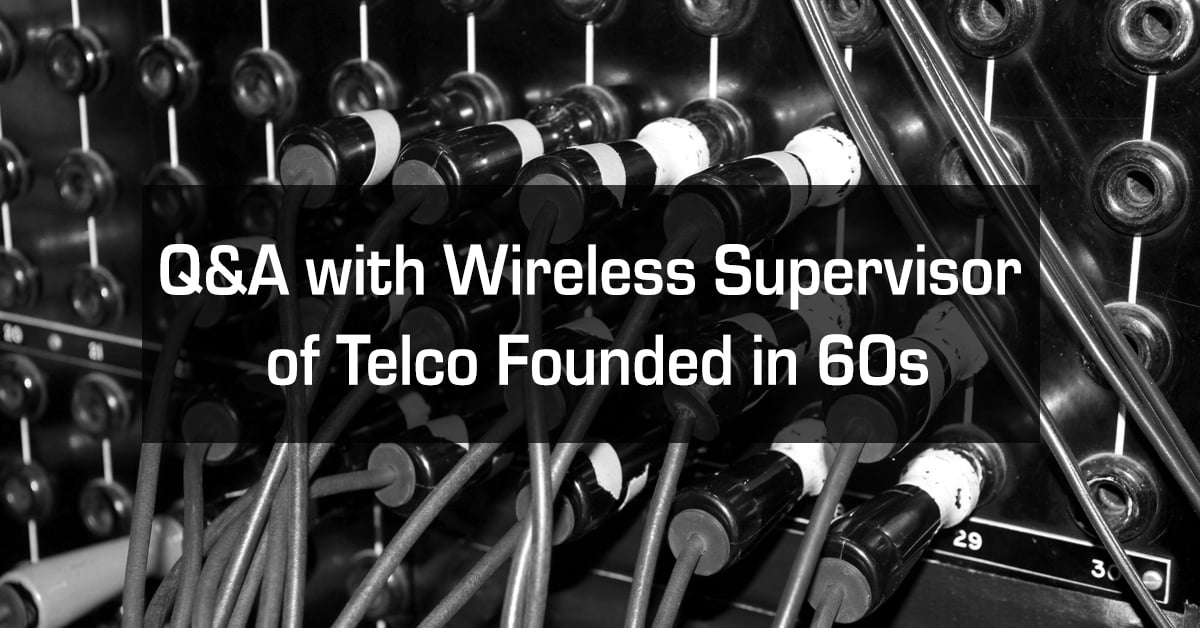 In our Quick Guide to Fixed Wireless for Telecom (CLEC & ILEC), we cover how many telecom companies are turning to fixed wireless to provide additional sources of revenue. We also include Q & A with a couple of Telcos doing just this.

Featured below is an excerpt from the interview with Adam, the Wireless Supervisor for a Telecom company that has been in operation since the early 60s:

What can you tell us about your company?

“Our company was founded in the early 60s as a member-owned, independent telephone company serving three towns in Iowa. Towards the end of the 70’s we bought out a competitive telephone exchange, where we installed a digital switch and all new cable facilities. In the early 80s we installed digital switches at our three original locations, along with new cable facilities for toll traffic between them. In the late 80s we joined Iowa Network Services, which connected us with over 300 rural telephone exchanges and over 125 independent telcos. Soon after we also joined up with a cellular network.

“The 90s and early 2000s were an extremely busy time for us, as we formed a new communications division of our company to roll out new CATV, internet, and VoIP services. A partnership was established with other independent telcos to form a fiber optic ring covering half a dozen towns, and to form a wireless (cellular) reseller company.”

What were the decision factors for offering fixed wireless internet?

“In 2000, the company began offering fixed wireless internet services. 2.4 GHz was used initially, then eventually 900 MHz, 5 GHz, and 3.65 GHz in the years that followed. I was not yet working for the company - in fact I was a teenager at the time. My family had dial up internet but we wanted broadband. We lived about 5 miles out of town, beyond the reach of DSL offered by the local telephone company.

“When we realized we had another option of faster internet offered wirelessly, we switched providers and became one of the early fixed wireless customers in 2002. After college, I found myself ironically working for the same company that provided that fixed wireless service for my family when I was a teen. Now I was providing that same solution my family benefited from. The fixed wireless model proved to be an effective way to reach those outlying customers like my family, and expand to new communities.”

How has fixed wireless helped your business grow?

“Over the years, we’ve seen a similar story play itself out time and time again. Building on the foundation of the communities we provided telephone service, we expanded to over 5 times as many communities (approaching 50 total) that we provide fixed wireless internet service to. Our telephone service is limited to within a couple miles of city limits, but we’ve utilized fixed wireless to expand our footprint into many of the smaller towns with a population of 2,000 or less. We truly capitalized on the opportunity to provide service far beyond those we can serve with our original telco infrastructure.

"Other important factors in our business model are cost of customer acquisition and ROI. The ROI for a new fixed wireless customer is measured in months, compared to years for a new telco customer. Likewise, the equipment and roll-out expenses are considerably lower for internet customers compared to telco customers.

“This is not to diminish how each type of customer is important. Also, wireless is not the only approach for our internet customers. When we are able to, we deploy fiber in new communities, especially when we anticipate that customers plan on streaming video as their primary source of TV. The point is that wireless is an excellent tool in our tool belt, and because we can offer robust wireless solutions, we are more maneuverable and effective than our less innovative competitors. In the new communities where we deploy wireless, we are seeing close to a 50% take rate.”

Read the full interview, plus the additional chapters listed below, by downloading our free guide now.

Interested in learning more about fixed wireless for Telecom? Our guide includes chapters on: